Whilst this is not a portable layout, I wanted to experiment with techniques I had previously used to construct test track modules. That was with lightweight timber and foam roadbed. Trackwork runs around the perimeter of the room generally around 600mm wide and operaters work from the spacious centre.

For this layout I used 3 types of foam base board as described below.

A
Expanded polystyrene foam EPS: this is a reinforced EPS product 120mm thick, light weight and used for forming concrete. The reinforcing layer is used at the bottom to give the material strength in tension on that side. For model rail use it looked like it had potential as it is self supporting over quite a long distance.
Problems: it is really too thick for our purposes and makes passing cables etc a little difficult. It is also incredibly messy stuff when cutting, drilling or routing. I wouldn’t use it again although 2 giant sheets of it side by side made a good “train set” layout for the grand-kids.

B
Extruded polystyrene foam XPS: this stuff is the bees knees! It is beautifully formed into even thickness sheets at 2″ (50mm) and 600 x 1200mm (at least in Australia where it is sold at Bunnings stores for $20.85 as at June 2016) and is actually labelled in part for “Hobbies – Train / car set bases”. Someone knows we exist!
It cuts and shapes easily without being messy. It is a near perfect thickness for mounting servos right in the foam – see below and I’ll show you how in another post. Drilling is easy with the right technique (another post) and the sheets are flat and square.

Further update July 2017: Bunning’s sheets (in Belconnen) no longer have a nice square edge. They are rebated which is fine for people applying insulation but not so good for this application. Trimming it off will narrow the sheets slightly or, they could be layed sideways.

C
Extruded polystyrene foam: EPS in a thinner section (25mm 1″). As above but even lighter (duh). But it has special uses and can be made quite strong with a simple cheap reinforcing technique.

I planned the layout with the specific objective of fitting it into the available room. The room wasn’t all that big but it was fully lined and insulated and part of my large workshop building. All woodworking tools, machines and other stuff were outside the room to ease dust problems.
With a size of 4090mm x 5000m (20 sq m) I didn’t have a lot of space so I decided to build around the walls to get maximum track length and operate from the middle of the layout. The bench widths are close to 600mm which is a reasonable “reach” width.

The section below using the 120mm foam is in place here with relatively few supporting battens. This material will easily span 550mm without support providing the reinforcing is at the bottom which is a stressed skin. The side plates are 180 x 17 DAR Hoop Pine.
The far side (West) is supported by the benches but it would have been better to use the ladder style frame shown to the right of the picture below and have free standing benches 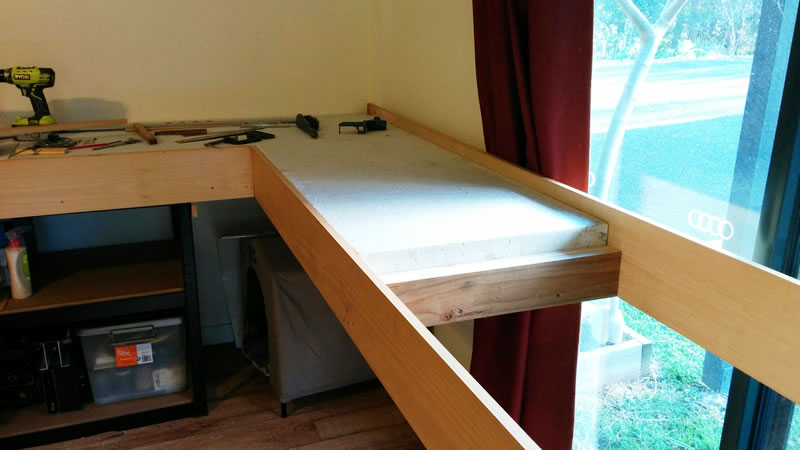 The two photos below show most of the baseboards in place. 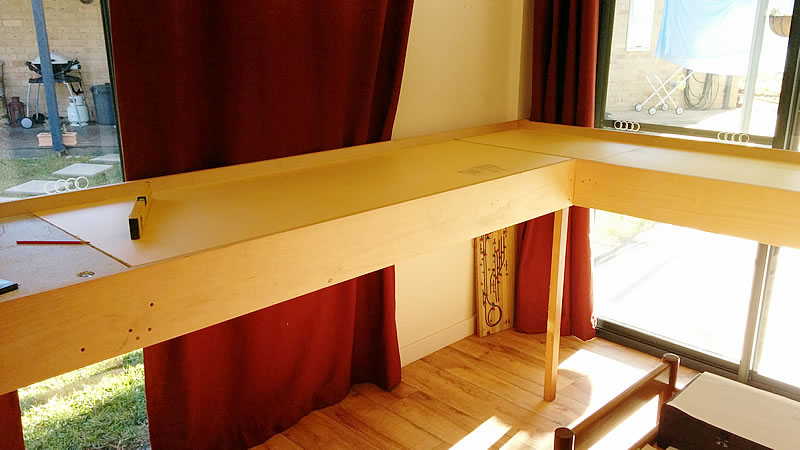 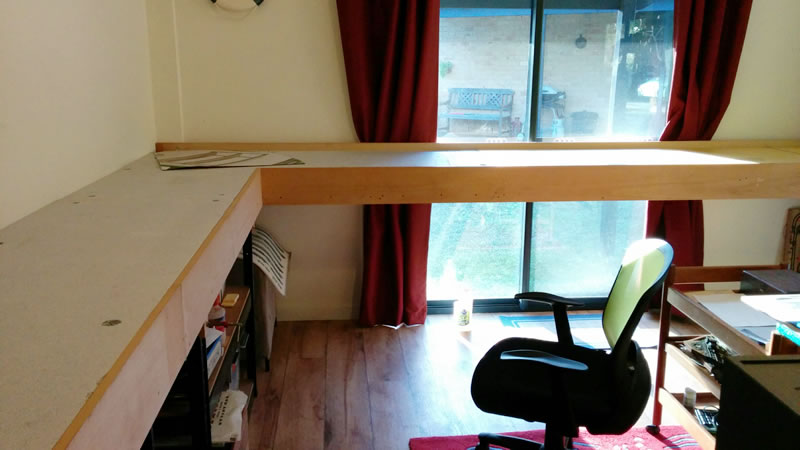 My workbench is shown below in an early state of development. Unfortunately it grew ever larger and dominated the centre of the room. Towards completion of the layout scenery, the workbench itself will roll away under the layout (2017 – this has now been done).  The doors and windows shown, open to allow air to circulate in our hot summer but the doors can’t be used to enter the room. 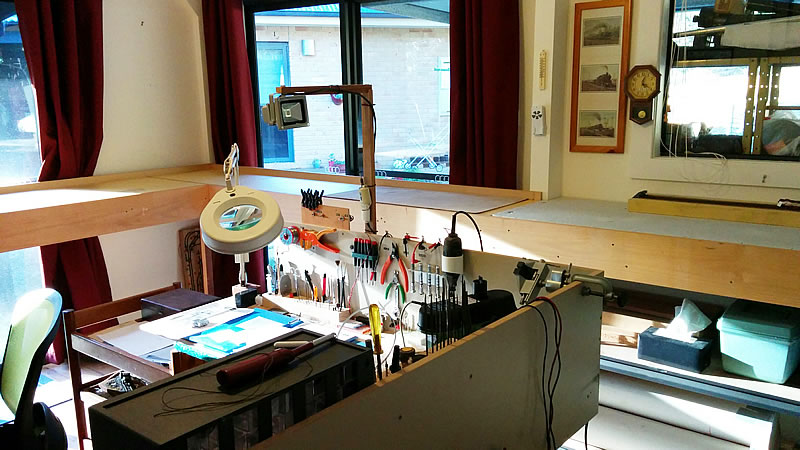 The entry door is shown below with a lifting deck to allow (geriatric) entry to the room. There is a separate post on the construction of this deck which is strong but light and an explanation of why it has very minimal dimensional change. 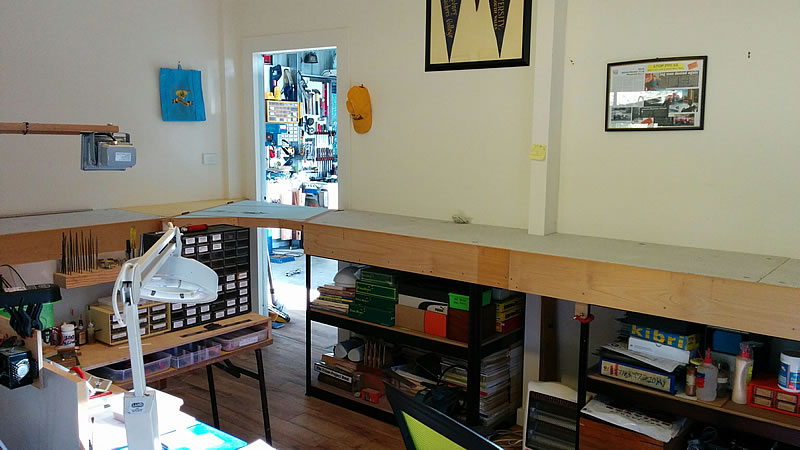 By May 2017, the layout progressed to the point where the complex electronics is functioning and the layout is operational although much is to be done in the scenic and structures department.

Many of my old website pages have been moved across to this blog although much is yet to come. …Rick