A project with a difference – PART 2.
A friend has a Fleischmann™ type 4028 0-6-0 Steam Locomotive which he would like to use as a “proving” loco for his under-construction Wolgan Valley layout. It’s a sort of a recycling exercise. This is the next exciting episode – Charles gets a decoder!

Very Germanic!! But it will be OK for the purpose, assuming that the NSWGR may not have bothered changing the whistle.

There are other things to do with DCC sound installs one of which is the Speaker and more details will follow. This is one is my favourite Sugar Cube speakers in my favourite mounting area – the smokebox. That way the sound comes from the right part of the loco! [post coming on fitting a sugar cube into the smokebox of a brass 30T class loco] 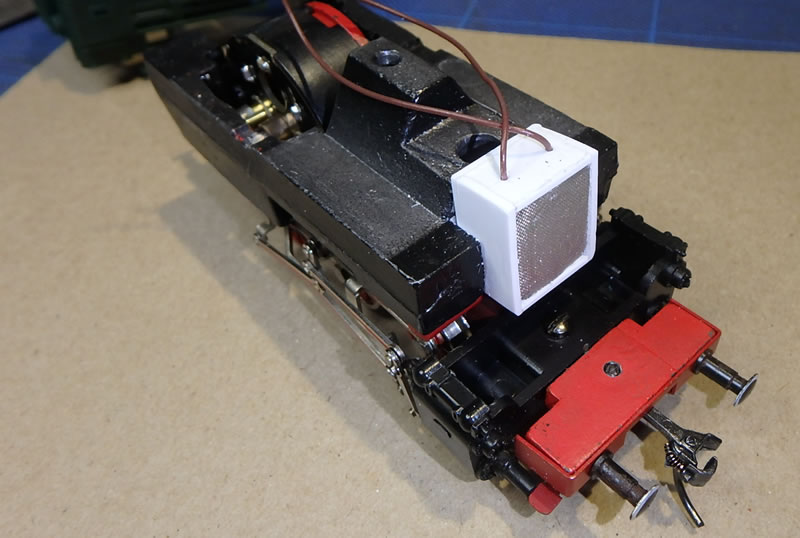 The motor, especially in this ringfield type requires special attention to make sure that it is isolated from the frame.
There is excellent technical advice on this in an article I obtained on the “All Aboard” Mittagong website – except it doesn’t seem to be there any more. The original PDF file I downloaded from “All Aboard” is however available HERE.

The replacement Isolated Motor Shield is shown below fitted to the mechanism. It is sold as Fleischmann replacement part # 50 4730 and is available from All Aboard as a spare part (not shown on the web site). 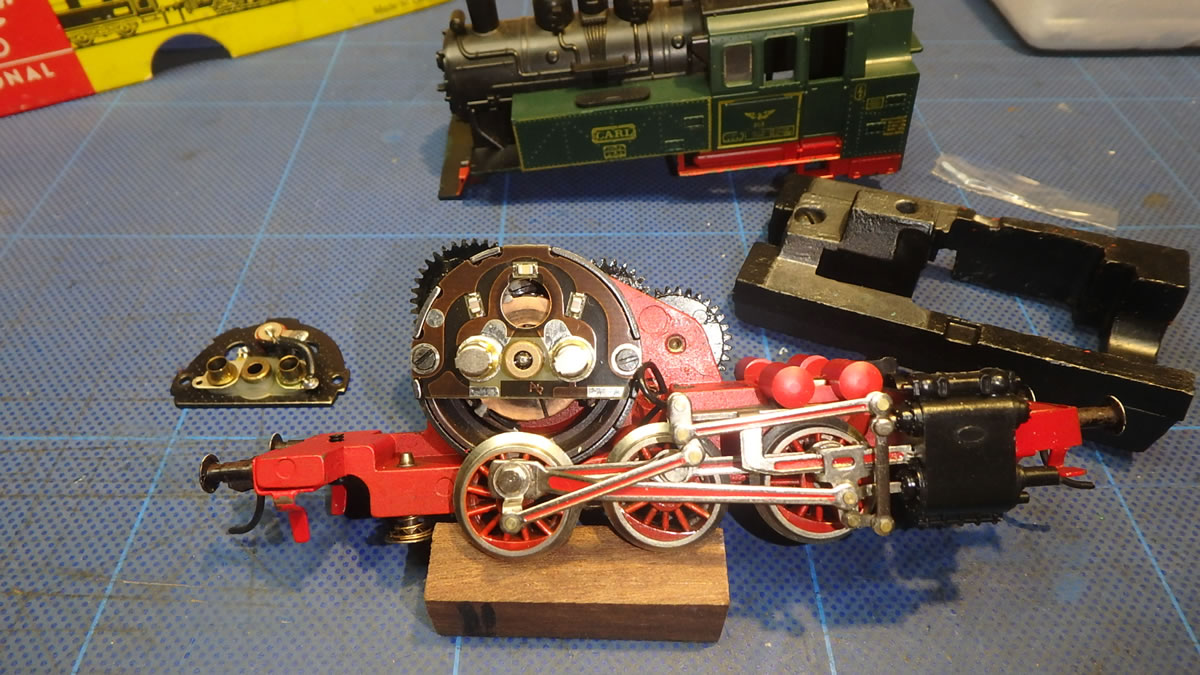 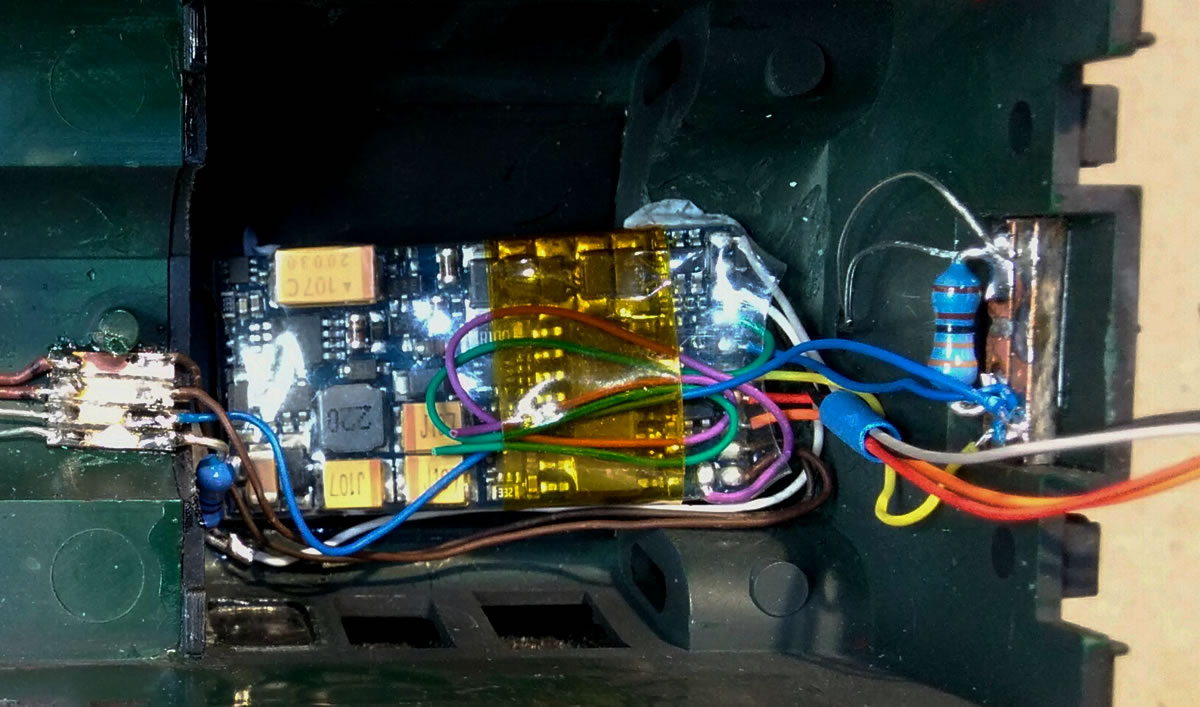 The decoder has a number of unused function wires and they are held captive by the (yellow) kapton tape. Two extra simple PCBs are also visible. Simple PCBs are described in THIS POST.
The one on the LEFT has 4 strips – 2 carry the brown wires to the speaker (in the smokebox) and 2 carry the wires to the front headlight.  The bottom strip can be seen to have a connection via a resistor to the WHITE function wire (headlight).

The value of the resistor is 3k3 (3,300Ω) indicated more clearly on the board to the RIGHT where the colour code is ORANGE, ORANGE, BLACK, BROWN, BROWN which is 3 3 0 (1 nought) and (1 percent tolerance) ie 3300 Ohms ± 1%  This value is higher than most people use but it provides a more prototypical yellow glow in the Warm White LED.

Incidentally the LED is a tiny pre-wired device where the LED size is 1mm x 0.5mm and is available in Warm White, Bright White, Red and Green & available on eBay for ridiculous prices.

They will fit into the smallest headlights on a loco but must be handled with care.

The pcb to the RIGHT is shown in detail below and feeds the rear headlight and the 3k3 resistor is on one strip which has been interrupted under the resistor making 2 isolated pads. 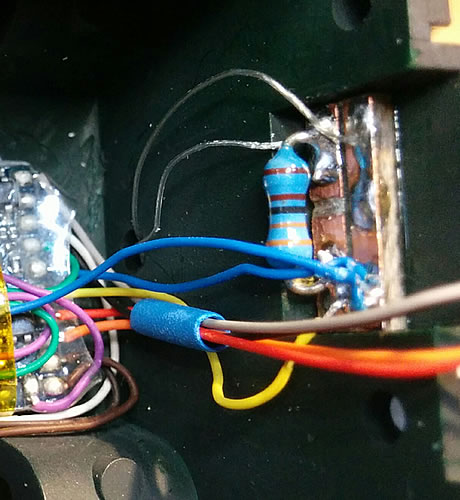 The common wire is BLUE and feeds to both small PCBs. The YELLOW wire is the function output to the rear headlight.

The speaker used is a Sugar Cube which measures 12mm x 14mm x 5.4mm thick (bare). This is one being prepared in an enclosure. 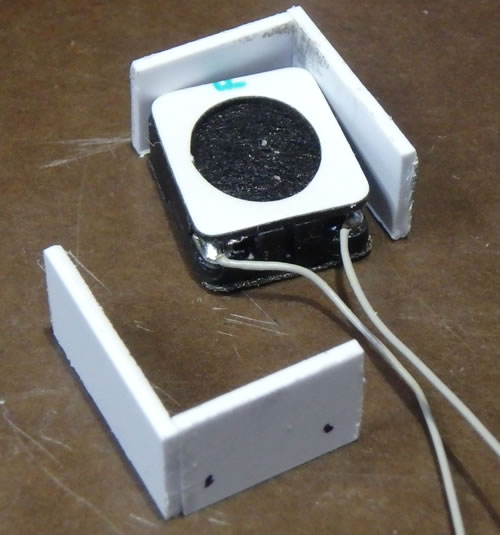 The following speaker is ready to go in: 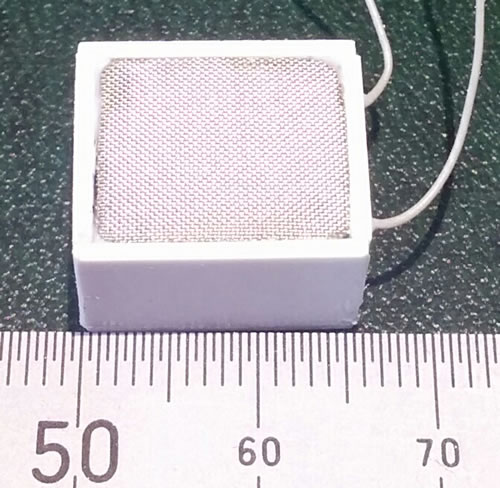 More about speakers in a separate Post.
And to save you scrolling back up – the photo below is repeated and shows the sugar cube sitting in the Smokebox and under the chimney which has been drilled out so that the sound is coming from the front of the loco both top and bottom. I will go to any length to try to get the speaker OUT of the tender and into a more realistic place. You can detect the difference in a passing HO loco.

If the speaker enclosure is mounted on the chassis it is inconvenient to wire as a plug and socket arrangement would be needed. Instead, I have located the enclosure to the inside of the body shell by the simple of expedient of a blob of Blu Tack in the top of the body which “grabs” the speaker when you assemble the two parts.  [Yes, I know … there should be a plug connecting the decoder and the motor/pickups but I got lazy]

Here is another loco with homemade plugs and sockets so that the body mounted  speaker can be separated from the chassis: 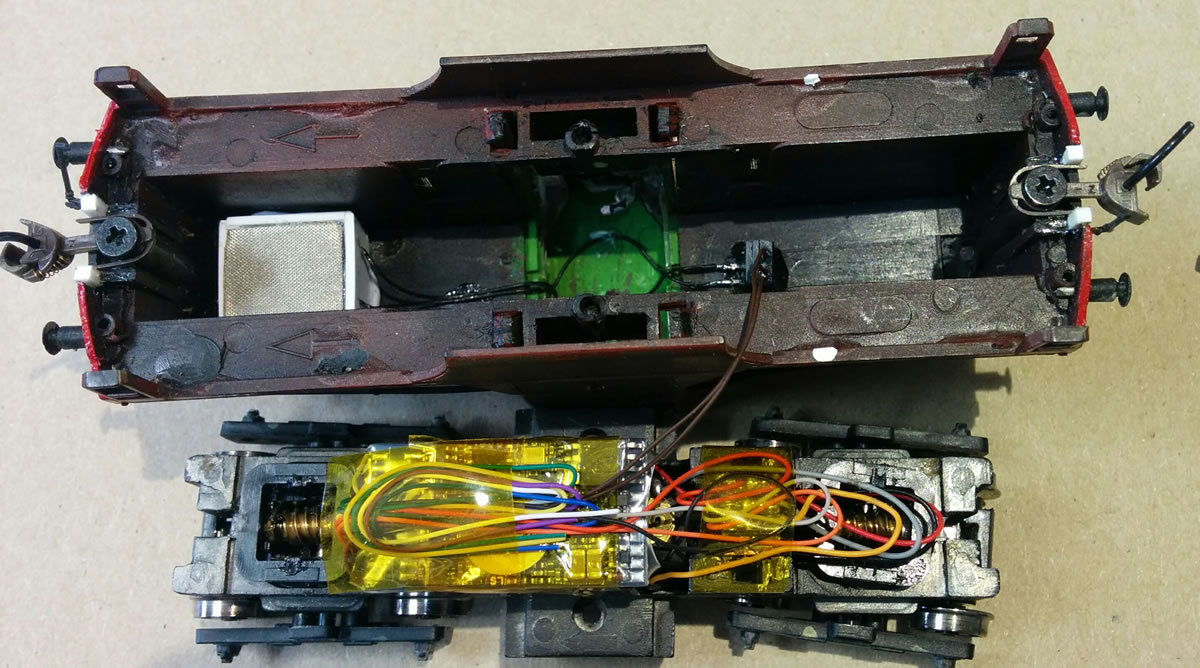 The 2 brown speaker wires from the decoder are connected to the speaker via a 2 pin plug. The body and chassis can then be separated. This loco is a 73 class shunter.

The next episode will cover painting into NSWGR “colours” but in the meantime, here is a preview of “Charles” making some noise! Deutschland Über alles!