Fitting a USB charger to your layout?
PLUS   WiFi THROTTLES – using old iPhones!

I have become a convert to using mobile phones as throttles. I first tried Android phones but lately I have become convinced that old iPhone 4s models are the go!

This post is supposed to be about USB chargers so here we go:… wait a moment!
The setup below is out of date now! and the charger is a more powerful model by Jackson and purchased from Jaycar Electronics. It still only just does the job, rated at a total 3.1Amps. If you can find a higher output unit, go for it.

On the shelf there are still 3 very old iPhone 4S mobile phones and my old Android phone which has … “carked it!”

The iPhones are ancient in the modern world of devices and each phone above  was donated by friends and family who had them stuck away in drawers and cupboards. They have the old 30 pin connector and nothing uses them these days. I did my research first and discovered that I could buy the USB to 30 pin cable for peanuts on the web. Get this: On eBay of course and the cost? ……. $5 for 5 complete cables including postage!!
If you don’t believe me look at the eBay site. Back to the phones.

You need to get them to Erase All Content and Settings. This can done by:

Android:    Look at the explanation on this site.

THROTTLES: you need to load an app into the phones:

(this will still be possible via WiFi using your App Store or Play Store.

This is what they used to look like when running on the device: The people who kindly develop
Wi Throttle for iDevices have made a couple of significant improvements.

iPhone 4S – Wi Throttle Lite – this is what the “Address” screen looks like.

It is showing the Roster obtained from JMRI Decoder Pro which must be running in the layout room. The phone connects to this by WiFi and displays several screens. This the one shown as “Address” (lower middle).

I have scrolled down the list and selected 4201 then “Set” that selection. Next I will select Throttle circled in RED.

You can now select from 4 sub menus: 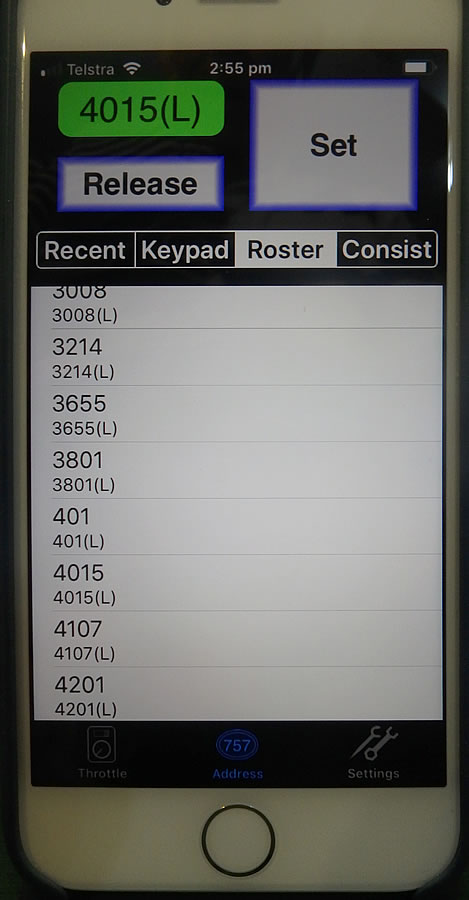 This is the major improvement: in this version, to see multiple control (Function) buttons, you had to swipe sideways which was a little awkward.
NOW, the function buttons now scroll UP and DOWN which seems more intuitive

The selected loco is shown with a green background.

The throttle is a slider on the right.

Direction can be predicted by the arrow pointer at “Idle”

The BEST BENEFIT – you don’t have to remember F numbers and what they do!
The Functions are in text on the buttons (albeit abbreviated) and you can put them where you like.

The next screen is now revealed by a swipe UP and shows more Functions. As below. 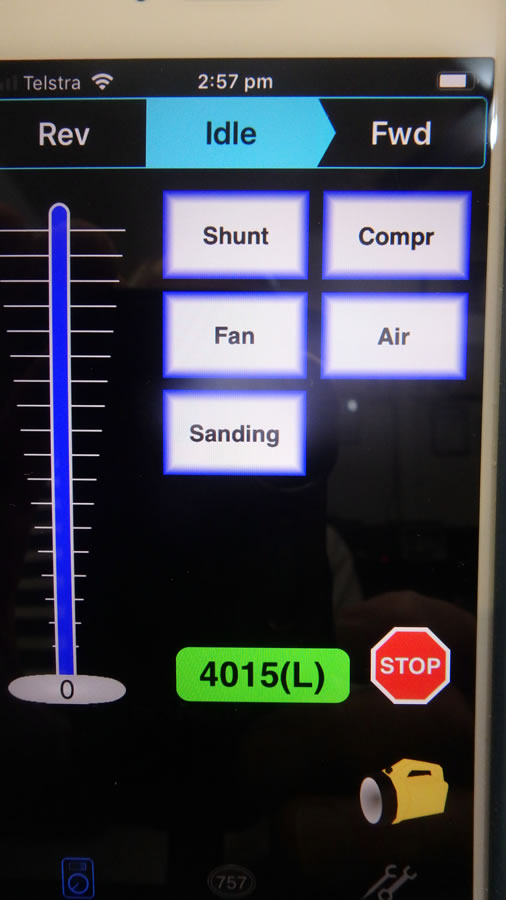 This is the second page of Functions.

You can have more if you like, on another screen!

To be quite honest, I now rarely use the command station throttles on my NCE system. Once WiFi has been established, this is the next screen.

When you press “Select” a Roster list appears and you select the loco. This screen lists the locos in the roster obtained by WiFi from JMRI.

Touch the loco to select it.

Previous locos are retained in a “Recent” list for convenience. The loco is now selected and the window shows the loco number, directions with the current selection in green.

This throttle is a horizontal slider.

Both throttles have a few options in preferences.

The Plain language buttons are a feature and there is room for plenty of them .

I have only lightly covered the interface between JMRI and Wi throttles. Perhaps another blog post??  (if there is any interest)