A Peco Electrofrog point modified for DCC is shown below. I have added the microswitch to the right which changes the polarity of the frog as the point changes. The microswitches were about 50c – $1 on eBay and are activated by the push rod controlled either by:
–mechanical point levers
–or by servos.
On this page “Point” = “Turnout”  / “Switch”       “Sleeper” = “Tie”

The first step is to attach the microswitch in exactly the right spot as shown below.

The critical bits are:

make sure you don’t get glue into the moving parts and hold it with a clamp as in the photo below. 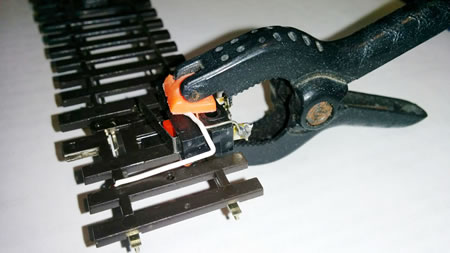 There won’t be any wires on your switch at this stage.

The two bridging wires here need to be prised out. Check the instructions with new points or on their website. 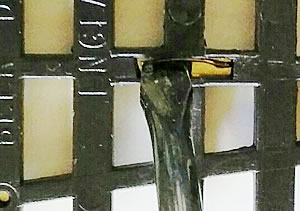 The easiest way to lever the two short wires is with a small screwdriver. 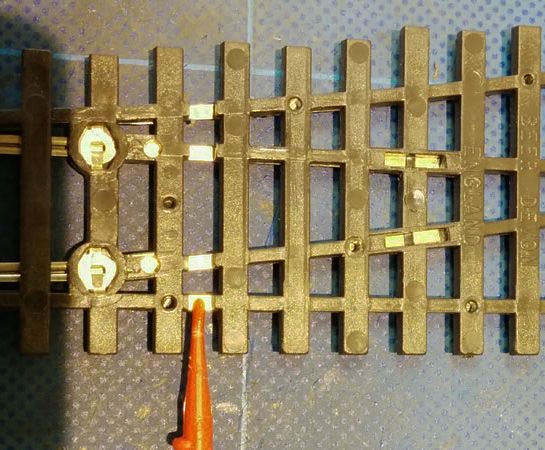 Then put a small amount of flux on the 4 rails shown. Use something like Carr’s Red Label or DCC Concepts Flux – a non-corrosive type.

The 4 rails have had a spot of solder to “tin” the rails and on the left a piece of tinned copper wire has been soldered in place. You can buy that from electronics suppliers like Jaycar.

The rails on the left are bridged and trimmed; the wires in the middle removed; and attention moves to the frog connection on the right.

The wire provided needs to be extended to reach back to the microswitch. Use similar size tinned copper wire. Here the extra wire has been twisted around the original and will be soldered together first then run down the length of the point.

This diagram explains what is happening electrically. In my method, the switch becomes part of the point to feed the correct polarity from the Common connector on the microswitch to the frog – as shown above by the GREEN connection 3.
On my layout, an additional (Light Blue) wire from the Common connection on the microswitch is taken below the layout to be used to indicate which route is set on the panel. This means my panel LEDS show which track has power.

The extra tinned copper wire has been soldered to the point wire and is run in the least conspicuous path. I gently melt the wire into the underside of the sleeper with the soldering iron to hold it in place. 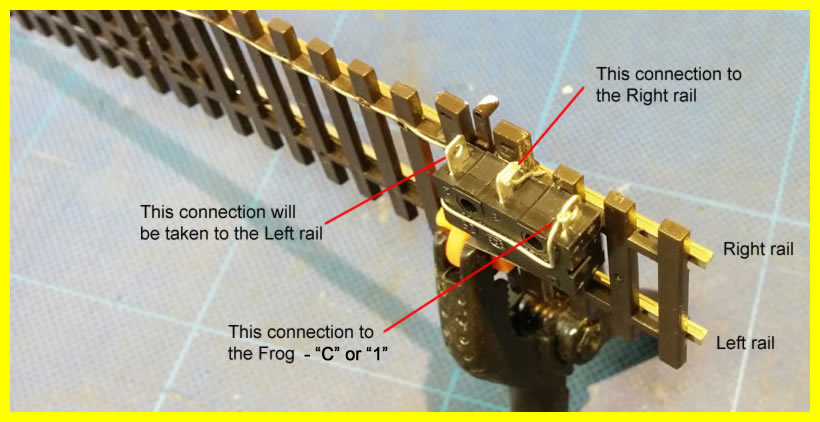 This rail area indicated has been tinned ready for connection …

…and this one ready for the other side. 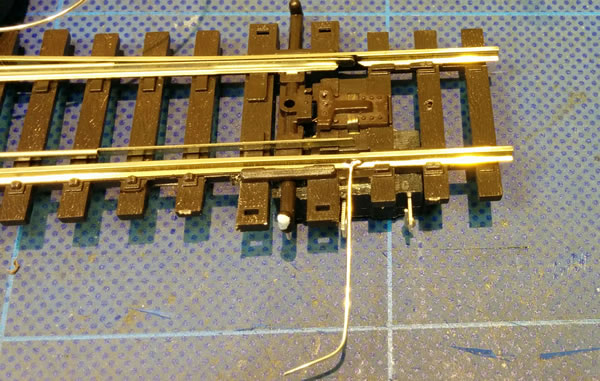 As the run is only a few mm, bare tinned copper wire is fine. 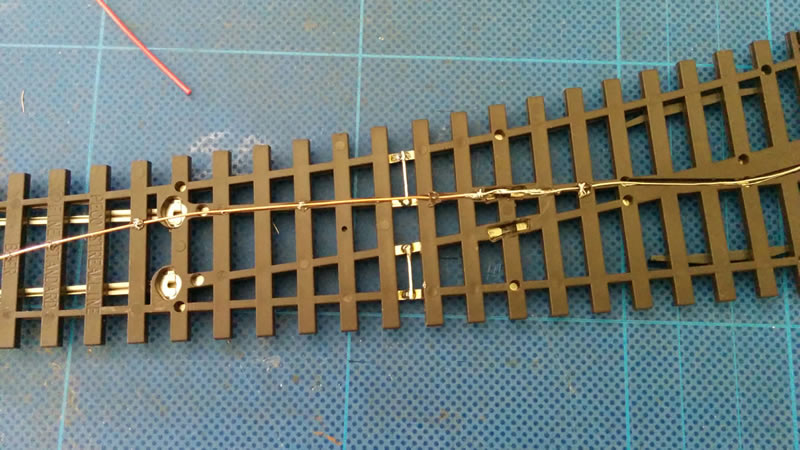 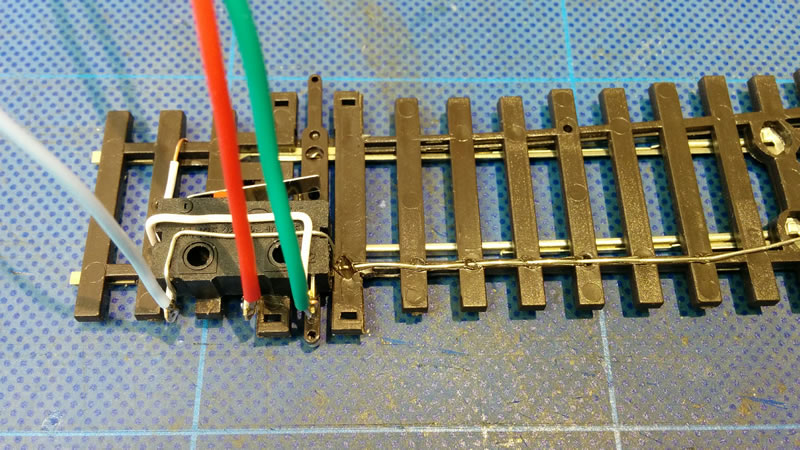 These wires run through the foam benchwork and connect to DCC (red & green) and the 3rd light blue wire provides a common connection (from the frog) to allow an indicator to show which way the points are set. 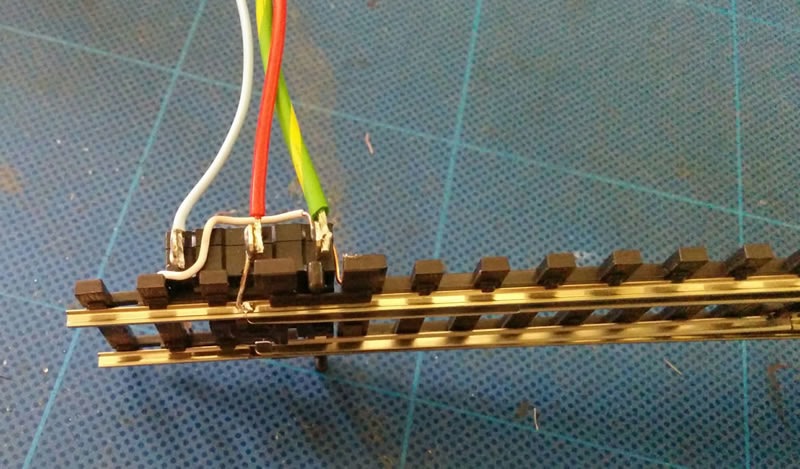 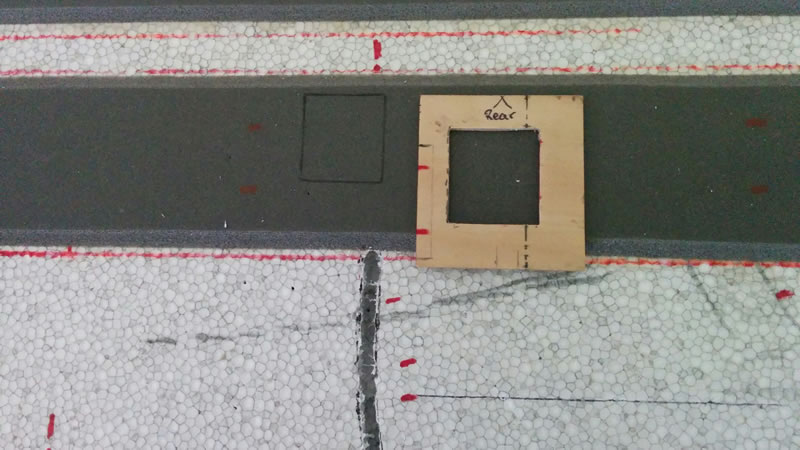 This template locates the cut-out needed to accept the microswitch under the point.
The red lines are used to align it to the rails as the switch is off centre. In this case the point was being operated by Wire-In-Tube via the trench shown.

Having marked out the position of the recess for the microswitch, cut the underlay and foam with a sharp knife.

Routing the hole to a depth of 10-12mm with a Dremel (and vacuum cleaner).

The final steps which can be done after the point is installed: